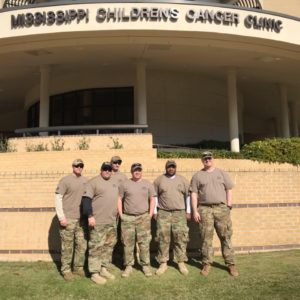 The 5th Squad was created in January 2016 by four founding members of the 184th ESC. The First IV wanted a club to keep everyone together when the military decided to do its best to separate. These guys wanted to be different. The First IV wanted to stand out from among the other soldiers, other veterans. The Club was started on the idea of doing for others.

Over several months and many long nights of sharing wisdom and lies, a club name and mascot was finally decided on.

The club would be named the 5th Squad. The reason for this name is because they wanted to have a name with military significance but also not too “HOOAH”. All formations have 4 squads. The 5th Squad is part of the formation but also not a part of it at the same time. The Wolf pack and wolf paw was also decided on as part of the club. The club is similar to a wolf pack in that they are not all in the same blood family but they have chosen to be a part of each other’s family. To be stronger together and have a bond like no other.

The 5th Squad has evolved from a “club” into an organization with a vision of helping make the world around us a better place. Our main focuses are God, country and family. The 5th Squad have started and sponsored two main charities, Ruck for Rugrats and Box 22.